Anyone visiting Clifton Hill in Niagara Falls could easily ask the same question. Formerly a Dave and Busters location, Pirates Cove is the largest indoor arcade and amusement centre with a fully stocked bar and restaurant. The Cove houses laser tag, a laser maze, cannon blasters where each team shoots foam balls at fixed targets while the clock counts down, an intergalactic race game called Time Freak and a pirate themed mini putt.

Our family doesn’t really do the video game thing, aside from some iPhone and iPad apps that the girls sometimes play with, for a set amount of time. We don’t watch much TV either. Spending our money in an arcade wouldn’t have necessarily been my first choice, but the kids were so very happy. I think because these forms of media are a rare treat in our house, they were even more delighted to be there. Really, though, there was such a huge selection of games, it appealed to all of us.

I found myself wishing that we had left the baby (19 months) home with his grandparents because I really wanted to play too! There wasn’t a lot for him to do, but he was good-natured and really dazzled by all of the lights and sounds. We let him practice his Ski Ball arm, and he happily rolled the balls up and down, and clapped his hands in glee when we won him some tickets. He also really enjoyed watching the girls play ‘Whack-A-Mole”. When we teamed up for Time Freak, he enjoyed running around pushing as many buttons as he could, but I kept him with me so the kids wouldn’t trample him. His highlight was the mini putt course, with the colourful glow-in-the-dark pirate décor. He’s really into steps right now, so he amused himself for a solid chunk of time carefully climbing over the barriers on each hole.

I’d say Pirates Cove was better suited to our older kids, eight and ten. I’d recommend the place for ages six and up, though the staff told us that birthday parties for four-year-olds weren’t unheard of. They suggest enough parents on hand to supervise the kids, and the staff will make sure the little ones have the laser tag room to themselves to enjoy safely, if there's a large party with small kids. If one of the adults in your group is happy to wrangle a littler one, or engage an older toddler in play, there’s fun to be found for them, just let them take the lead.

Our older kids ranked the Laser Tag as their favourite feature, followed very closely by the arcade, which they never seemed to tire of. The girls enjoy mini golf, but they also found it entertaining to pretend to be mermaids swimming through the glow in the dark scenery. My personal highlight was watching Daddy rock out on Guitar Hero. Our kids were amazed at his skills and my ten year old exclaimed "For once, I'm not embarrassed!".

Here's a video promo for the Laser Tag at Captain Jack's. Can anyone tell me what accent the announcer is doing? I counted American Army General, Buccaneer, and Angry Leprechaun.

Check out how beautiful the golf course is. It's in really good shape!

We were surprised by the amount of selection on the menu, and the restaurant is clean with pristine bathrooms. Pirates Cove serves decent pub fare, with a very reasonably priced kids menu. It was so much more affordable than we expected for Clifton Hill. Their drink prices are so cheap, I had to snap a photo to show you. 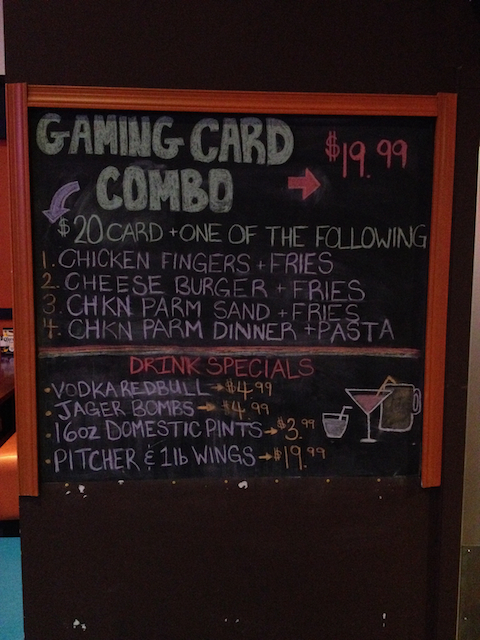 After the kids re-fueled we let them check out the arcade games on the second floor while Daddy and I finished our drinks. The Cove has a fantastic date night package available; $19.99 gives you a $20 game card and one meal, with several options to choose from (see photo above). We are definitely returning sans kids to enjoy the fun on our own. Pirates Cove also hosts UFC nights any time there’s a fight. I’m not a UFC fan, but I’d also check this out, because I bet the atmosphere is fun. The Cove is a popular choice for corporate events and team-building exercises, and I’m sure this is because the opportunity to play is irresistible for adults too.

Birthday party packages are a great deal. $20 per kid gets you pizza, pop, and a $20 game card, and then the additional attractions can be added on for a nominal fee. The staff at Pirates Cove are warm and friendly, so I imagine they’d be happy to help you plan a fantastic event. The waitress we had was lovely, and she’s been with the place since it originally opened as Dave and Busters. Anyone in the service industry knows that says a lot about the quality of management. There's a lot of competition on Clifton Hill, so having staff who great you like a special guest and who treat you like a welcome visitor goes a long way.

We let the kids (including the baby) stay up a bit later than usual, and before we left, they cashed out their thousands of prize tickets. We were lucky to arrive when it was quiet, in the later afternoon before the dinner rush, and there weren’t any other kids there yet. This meant that several gracious adults donated their prize tickets to our monkeys, because the prizes are really geared towards children. We decided to pool all the tickets and divide them between the girls at the end, with a small amount dedicated for a little something for the baby.

Daddy helped them choose some nostalgic favourites from his own childhood; a potato gun, a robot hand on a stick operated by a trigger, and because we have a twisted sense of humour, we left with three inflatable hammers to help the kids with conflict resolution. The baby got a large yellow ball, and because he knows his colour words, he was able to tell us which colour he liked best. Adorable.

The kids left sweaty, tired, and happy! They didn’t fit or fuss on the ride home, which usually means that they had a good time, and played hard. Though, on further reflection, it may have been because they used their robot hands to grope and tickle us and each other the entire way.

Always park at the green P lot on Victoria Street, near the Appleby’s when you visit Clifton Hill. If you don’t mind a short walk, (under ten minutes), parking is $5 versus the $10 and $15 you’ll find on the Hill.

Pirates Cove is about to open an IHOP on the third floor! In peak season, get a jump on the crowds by having a early decadent breakfast before unleashing your pancake-filled monsters on the thee floors of gaming.

Set a dollar limit for spending on game cards, and communicate that to the kids. You can blow through the game cards quickly, so hatch a plan with the kids that they can understand, and then help them make good choices in the arcade if they aren’t sure where to spend their time and money. They will be better equipped to deal with “no” if there are fewer surprises.

Have your kids share all of the tickets that you win to encourage camaraderie and teamwork. This kills any real competition, and if you have children close in age, you'll be grateful that they are working in harmony. Divide the tickets equally between them, and then either let them choose whatever they want, or give them some prize selection guidelines. We have a "no candy" rule for example.

Bring a water bottle. Our kids got hot and sweaty running around and playing. Hydration was necessary.

The main floor of the Cove opens right up to the street, and Clifton Hill gets really insane during the summer months when tourist season is at it’s peak. Keep an eye on your valuables and your kids. Pirates Cove has lockers available, if you need to store anything.

Niagara Families can be your go-to guide to help you experience the exciting and often FREE family-friendly events that take place right here in our community!

Niagara Families can be your go-to guide to help you experience the exciting and often FREE family-friendly events that take place right here in our community!